Each pod is actually a self-aware machine. They all have an instinct to significantly alter worlds for an unknown purpose, but each one has different methods of doing so. Where they came from and why they build is not certain.

Pods start off with no weaponry, little mobility, and are overall weak. However, they constantly upgrade themselves, and the servants that they create. The machines can choose to use most of their parts on themselves, continually building themselves into a powerful Juggernaut, or becoming unstoppable assembly lines for hordes of smaller robots. Each machine adapts to its environment and any encountered enemies. Weapons and vehicles are reverse engineered and used for various purposes.

Shown below are a few machines that have spent their time upgrading themselves. Each has taken its discovery, and used the parts to upgrade itself for a different purpose. The first being a powerful assault unit, the second leads armies of clones and brainwashed soldiers into battle, and the third has built itself into a fortress, where it spawns legions of machines. 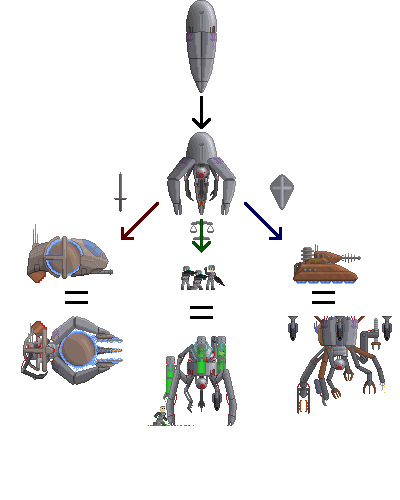 To date, only two live machines were ever discovered. All future findings will be recorded here.

The first Automated Reaver Machine was discovered floating through deep space, with no obvious destination or source. Discovered by chance when a freighter pulled it into its cargo bay and sold it to the nearest planet. After being probed by researchers, the pod woke up and begin tearing the room apart to make small machines of unknown purpose. The team thought that they were prepared for any scenario. They were prepared for the pod to awaken, but they did not expect the machine to start cutting out the walls and escape outside into space. The machine began to cut the research station apart from the outside, with no apparent interest in anyone on board. Every-time they attacked the machine, it adapted. The machines it began to produce became more violent and fought back with reverse engineered technology. At first it ran from the attacks, then it started fighting back. By the end of the conflict space suits taken from the dead were being automated and used for various deceptive purposes. When it finally stopped attacking the station, and instead began to merge itself with it, a few marines on the station sacrificed themselves to cause a self-destruct of the station's power core. The entire scenario proved just how amazingly intelligent and adaptable these machines can be.

During a conflict between the Terran Confederation and the Ceph'qua, an ARM landed on the planet in the middle of a large scale Ceph'qua invasion. Information about the events that happened during the conflict are still being declassified.

Many decades ago, before ARM's existence was known, a probe was spotted in deep space near Anhurian territory. It's description matches that of an ARM pod. unfortunately, it was never seen again, as its exact location was never recorded.

More recently, another possible pod was found traveling through Ceph'qua space. It's exact location was also not recorded.

The third indirect sighting of a Pod however, was confirmed as an ARM. A satellite orbiting a mining colony world of the Avonii empire was destroyed when a pod collided with it. The small colony did not yet have an information relay to call for aid, and was poorly equipped to capture the pod. The pod struck on the daytime side of the planet. The planet being very close to its sun, this left the avonii unable to pursue the pod in time, as all ships available would have been damaged by the intense solar activity. They were however, able to observe the pod's trajectory. To everyone's surprise, the pod flew directly into the sun. It is believed that the pod was destroyed. Either way, it is no longer recoverable.

The first real clue to ARM's purpose was revealed on a planet only called MI0782a orbiting an unclaimed star. by lucky coincidence, astronomers from the planet Mithra noticed that MI0782a had a very different atmosphere than it had when it was first discovered. Scientists were sent to the planet under military escort and found that the once unremarkable planet had become tremendously hot, and it's surface was dotted with alien terraformers. The sky was covered almost entirely with clouds which trapped heat, and the atmosphere composition was altered. All around these alien structures were deactivated machines. One unusual structure was found that appeared to be a large factory, but different from others like it in that parts of it were significantly lower quality than other factories discovered. It appeared to have been upgraded many times out of much simpler structures. Around this structure were discovered robots that were made from the shell and parts of an ARM. There were no signs of battle, all of the machines discovered were in fine working condition apart from them all being deactivated, and there was no sign of any natural disasters. Solar activity was not the cause either, as all machines were completely unharmed. The only thing out of place was the "eye" of the ARM which had melted in an intense heat and cooled into a hard metal puddle on the factory floor. It was determined that without the original machine the rest of the machines had either deactivated immediately, or ran out of power after not recieving any new orders. Sadly, no new technology was discovered among the ruins. However, the machines that the ARM had built were sold for a fortune in credits after scientists had thoroughly studied them.

ARM's true purpose is something not fully understood. ARM's violent behavior has brought theories that ARM's purpose is to kill off all lifeforms that it encounters. One way that it does this is by making their planet unable to sustain life. It is also possible that ARM may be killing all life on a planet with the purpose of transforming the planet into a world for other machines. It has been suggested that ARM simply does not care about other lifeforms, and that killing them is merely a necessity of it transforming the planet. This theory does not explain why one would attack a space station. Each ARM could even be an advanced alien lifeform that has mechanized itself. Each traveling by its own will and for its own purpose.

From what we do know, ARM pods are nearly impossible to find. Each is only as large as a small vehicle and gives off no heat or emissions of any kind. They are almost indistinguishable from asteroids or space junk. It is possible that pods have landed on civilized planets all over the galaxy already, and simply haven't been discovered or awakened. Each sighting so far has occurred at tremendous distances apart from each other. pods found in deep space were all discovered with what appeared to be engines. Pods found in solar systems or on planets have not had them. It was never discovered how these engines function, but it is believed that pods are capable of traveling at nearly 90% the speed of light. However, as to how they became so widely spread across space without some form of faster than light travel is unknown. The technology within the pods is surprisingly not very advanced. Even the machines found created by these pods were created with technology already in use across the galaxy. A Reaver's eye is the exception to this. it's quality and construction appears to be much greater than the construction of the rest of it's body or the robots it creates. ARMs show the ability not only to easily reverse engineer any technology that they come across, but they are able to improve upon them. ARMs not only adapt their technology, but also their tactics. The first ARM ever awakened seemed oblivious to danger at first. Hours later, it had been discovered that some of the men on board the space station had been replaced by robots, Corridors were laid with traps, and the Reaver itself was wielding firearms and making bulletproof armor for its drones.

For those who wish to know the truth behind the Automated Reaver Machines, their story has been included below. These spoilers may change the way that you look at this army. http://pastebin.com/vkrSUbir

Community content is available under CC-BY-SA unless otherwise noted.
Advertisement