Before the Avonii had reached feasible space travel, 3D printing had been invented. At its beginnings, it could not do much more beyond commercial products, as it could only work with certain, often brittle or cheap, materials. As time went on, new materials were developed, and slowly ships became more and more synthetic half-breeds. The sharp angles of the Cyber-industrial look have now been all but replaced, as now all units of the empire are created almost as a single piece. Shipyards and factories create units at a molecular level, slowly bringing fully constructed objects into form. Having no welds, bolts, or connections of any sort, Imperial ships can last for an indeterminable amount of time if no battle damage occurs.

The material which makes up the armor of most Imperial ships has a slightly rough texture and a natural reddish tint. It is a sort of metal, but it flexes under great force. Little care is given about dents or scratches, because damage is only possible if the force or energy is enough to actually penetrate through the armor.

Internally, the wires of Avonii units are only as thick as they need to be to transfer energy or information. Some wiring is even microscopic in size. Being printed out, ships are almost a completely solid block of various parts, with no space aboard the ship that isn't taken up by some part or backup system.

While human manufactured units normally move by pistons and motors, avonii units are driven by magnets and muscle. In comparison, Avonii made units can move in smooth, life-like ways.

Because of the miniaturization and non-standard design of unit parts, and lack of access to crowded systems, external repair is often impossible. If repairs cannot be made on the outside by specialized repair robots, they must be done by the unit itself. Most Avonii units contain extensive coolant pumps throughout their frame. Within the coolant, are millions of nanobots, which perform repairs on the unit from inside. Advanced or large units often come with their own backup supply of raw material, which these nanobots will use to repair a damaged unit.

Repairs at such a level, can take too long if they are needed immediately in battle, meaning that an incapacitated unit will remain incapacitated. If time is something that can be afforded, all units that have not been entirely scrapped can often come back to life and return to the group for more extensive repair. Soldiers of factions who have been at war with the Empire, have told stories of squads of HOUNDS coming back to life, days after a battle has ended. These "zombie" HOUNDS would fight a guerrilla war with the newly occupying force. Hounds missing limbs, heads, just full of holes, or mutilated vehicles stuck in the mud, would go berserk without warning at any time. HOUNDs would sometimes form in groups hidden around, waiting for their deceased masters to return to them, even when they would never come.

Avonii use radio communication extensively just as any other faction. However, the preferred method of communication between spacecraft is light whenever possible. Ships will often fire infrared beams from their lasers into each other's sensors for faster and more secure information. Because Avonii fleets rarely communicate with non-imperial ships, and radio is only used when needed or when activating tactical maps, Avonii fleets often come in eerie silence. Fleets may set up uncomfortably close to another faction without ever giving warning or intention. Human formalities are often lost to them, making the Avonii uneasy neighbors to keep around.

All Avonii units share their information at all times. All information and even senses are transmitted to one another. If one unit sees an enemy, then the whole fleet has immediately seen it. Having most of the fleet as A.I, enemies are identified immediately, and action comes before he knows what hit him. Even living soldiers commanding squads are given extensive information in their HUD. Soldiers can view in their HUD the cameras of up to two other machines or squad leaders. The Avonii move like a single entity because of their vast information connections and immediate response times of the machines.

Nearly every unit in the empire is autonomous. There are a few exceptions, such as Allor light frigates, Talon dropships, and the command quarters of a battleship. Even when piloted, most ships contain extensive A.I, capable of running without the crew on board. Imperial robots are capable of learning from any situation. Modern Avonii machines are the result of a century of adapted A.I, having a programmed A.I. base that almost shows having common sense comparable to a small child. Even so, the A.I. codes cannot always handle a new or unexpected situation, and all attacking forces keep a commander nearby whenever possible. Squads of hounds are each led by soldiers, fleets are led by a commander's battleship.

The A.I. program used in Avonii war machines, named Karna, is the same one that has been around for a full century. The code itself has not been directly tampered with since the first 30 years, and ever since has simply been adapting. The code is written entirely in binary, having no higher level language to interpret the instructions. Because of it's unpredictability, a few fleet admirals of the past chose not to use this coding in their machines. Today, only the Imperial guard does not use Karna in it's machines. The Guard instead uses Kilik, which is written in an avonii programming language, and is constantly modified. Kilik is an adaptive code like it's older cousin, but it is much younger and has much fewer adapted battle tactics. In the Military, the exact same Karna code is used in all machines from battleships to infantry. The A.I. is able to learn what kind of body it possesses and download tactics from other units of like kind. If Uploaded into a heavy tank, it will connect to other tanks to learn what they have learned before establishing itself as fully operational. If a military A.I. is loaded into a new form of unit, or no extranet data is available, it will experiment with the machine to determine how to use it. Without supervision, the results can be comical, or disastrous. On the other hand, Kilik can only use specific units based on what it is programmed to use. There are different versions of the code needed for wasps and assassin wasps.

Many other A.I. codes exist in mercenary or civilian use.

Some factions are very wary of the Avonii. The extensiveness of military automation and communication, leaves the Avonii one rogue A.I. away from extinction. However, this does not seem to bother the Avonii at all. Instead, they actively try to create A.I. sentience, some seeing it as the final step of evolution of the race, others see it as a way to end the hardships of war or the corruption of government. Current attempts are already in the sixth major attempt, with a partially biological computer named T.A.L. 6. Currently, TAL6 resides in a space station on the far edge of the Avonii home system. The extent of progress done is unknown to even the emperor.

Possibly a later addition to this page. 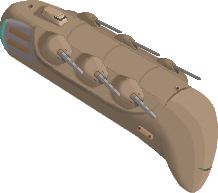 Retrieved from "https://picturewars.fandom.com/wiki/Avonii_Technology?oldid=4526"
Community content is available under CC-BY-SA unless otherwise noted.