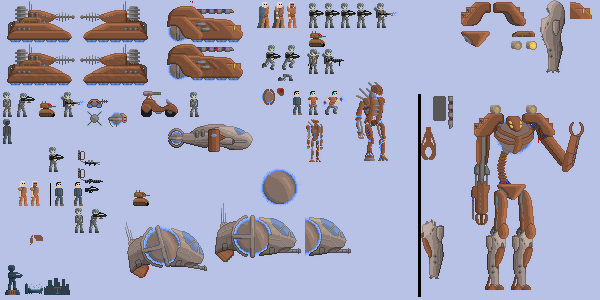 In a world ruled by gods well into the modern era, the cultures of mankind revolve around their chosen deity. Those who call themselves the disciples of lightning, follow the lightning god, Thadus. Under his rule the disciples have unlocked many secrets of electricity. However, their god has become displeased by his limitations. As his people learned the power of modern technology, their need of the god that granted them their power was waning. For years he became silent. No longer answering the temple priests, the people began to wonder what had happened to their god, and what would become of their empire. After ten years, Thadus returned to his people with a new vision for his empire. Thadus needed the power of other gods to become stronger, and his disciples would aid him in his goal. He sought to declare war upon the other nations. If only he could attain their powers, he could one day become the ultimate god. He would end all suffering of his people, and establish their dominance across the earth. With the promise of becoming immortal, the disciples rallied to his cause. All who died would one day return in a place of honor with their god. However, Thadus could not lead them in battle personally, and thus he granted the powers of demigod to his greatest follower. The demigod Arkus now leads the disciples to war, in a quest for souls.

Fearless and devoted infantry, most come equipped with a bullpup rifle, and fragmentation, flashbang, or smoke grenades.

Shock troopers carry a large battery on their back, and wield a shock rifle. Their range is limited, but they can kill or incapacitate multiple targets with a single flash of lightning.

A soldier trained to use the rail rifle. They always work in a pair. One acts as a spotter, while the other uses the rifle. Both roles are easily swapped as they are trained in each should one of them be killed in action. The rifle itself can easily kill an armored soldier, as well as pierce the armor of light vehicles.

The most fearless of infantry, their torso is well armored, but they carry almost no armor elsewhere. Their fists channel magic energy which grants them the ability to manipulate lightning. They can generate small amounts on their own, but grow in power when near a power source. Priests are masters of close combat, and can form small shields, or create powerful electric blasts if given enough power.

A junk golem contains within it a small artifact which can generate great amounts of electricity. This artifact can also house a single soul of a fallen soldier. Junk golems will grab any object around them which can be affected my magnetism, and pull it into their own body. As long as the artifact remains intact, the golem will not be affected by any external damage. Depending on the quality of the artifact, a golem's intelligence will differ. They can throw parts of their body with lethal force, or snatch an enemy's weapon from his hand. Most will not understand how to use any form of ranged weaponry, but it has been observed in the past.

Though it contains no artifacts, the Tesla tank houses a huge electric battery. It can generate incredible amounts of it, and fire it at an enemy. The effect on any vehicle that conducts electricity can be devastating. The tanks float a short distance off of the ground, arcing electricity into the ground as they move. These tanks are totally silent save for the electric humming that can be heard when next to one.

Railgun tanks are powered by an artifact. They use a large railgun capable of penetrating heavy armor. Like the Tesla tank, they hover off of the ground, arcing electricity as they move. Their armor in the front is extremely heavy, but they have almost no rear armor, as well as having it's artifact exposed in the back.

The hornet is a light support aircraft, They carry two heavy machine guns, and can transport a couple of soldiers. Their flight is powered by two small artifacts.

The Stinger Gyro levitates by use of a single large artifact. They contain a single minigun, and a missile launcher.

The junk titan houses a massive artifact, containing over a thousand souls. It is not entirely held together on it's own power, but is a hybrid of magic and technology. The full power that this monstrosity is capable of is not known.

The chosen leader of the armies of lightning, Arkus has all the powers of a priest and much more. Arkus can shield himself with energy, run faster than a normal human being should, destroy tanks with his bare hands, and more. He is cold and merciless, fully devoted to the cause. Arkus can gain energy to himself by taking the souls of men, and may kill his own men to survive.

Community content is available under CC-BY-SA unless otherwise noted.
Advertisement