An unamed group of robots flew around the universe from planet to planet looking for life to feed their mechanical hunger and help design new plans for better robots. The landed on a planet named Redan XI and hunted for animals. The whole planet though was covered in a nasty swamp that held a vast secret. After finding little viable life forms, the returned to their ships and continued onwards. The next planet they entered was a forested and full of a dense community of animals. After gathering all the wildlife they needed, the returned and left. Then, parts from the ships factory had been disappearing. The robots had no idea why and couldn't find anything in the ship. While patrolling the cages, a robotic guard looking into the one to his left and found blood splattered along the transparent walls of the cell. <//:ALERT ALERT Animal RSB4-5672 HAS ESCAPED, Repeat, Animal RSB4-5672 HAS ESCAPED://>

The image showed an empty cell with bright green blood also splattered along the transparent walls of the cell similar to the first missing animal.

Later, another robot became lost and the information got locked away. This repeated several times till a whole mass of robots became unresponsive around the same time.

Afraid, the ships computer put the ship in lock down and all robots in hibernation.

Several weeks on hibernation on the ship, the A.I. picked up sound frequencies coming from the other side of the door holding the A.I's chip. Coolant rushed to cool down the chip. <//:Reboot! All robots in 25meters of the A.I. room 342 defend! Overriding Code-3945 5109://> The robots woke up and quickly walked towards the room. The A.I. heard what seemed like guns being fired and metal ripping to pieces. BOOM! The door blew in and grotesque figures walked into the room. Some vomit colored flesh and robot parts covered these animals into a way to enhance them in battle. Small tendrils slithered into the A.I.'s holding compartment. A quick zap and the tendrils quickly veered back. Then slowly returned but to different place there wires were unplugged and moved. The tendrils slowly moved back and forward into the A.I.'s compartment. <//: HIGH ALERT HIGH ALERT, I AM BEING REPROGRAMMED OR POSSIBLY DESTROYED. SOMETHING FOREIGN IS ON OUR SHIP://> At it's last moments of artificial life, it sent the message only to see the same text coming from every other ship in the fleet. <//:S.O.S.://> <//:Systems dead://> 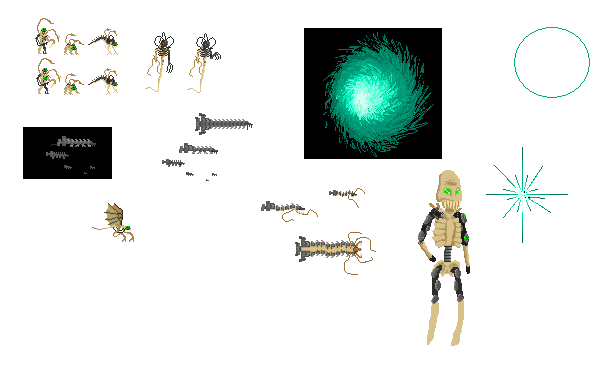 The is the sprite sheet with all the game sprites.

This is the humanoid mutant. Everything about the size and shape of a human becomes this when exposed to the infectious disease. It is the main combat unit with two large talons that can be used for ripping apart metal of flesh.

This is the small mutant. Everything smaller than a human is morphed into this. Light soldier good for throwing enemies and cannon fodder.

The recon mutant. This is created by any organism to large for a small unit or large for a humanoid unit. It has great speed and can hold still for hours on end. It can climb on any surface and as the best camera's of all of the mutants.

Brain unit. A rare unit to see on a battlefield, it is a leader of a mutant force using coding and brainwaves to control all the other mutants. It is usually a ship's A.I. reprogrammed and but into a living shell.

Flying unit. These come from any small flying animal and are used for recon or attacking in swarms to distracted an enemy.

Retrieved from "https://picturewars.fandom.com/wiki/Infected?oldid=4253"
Community content is available under CC-BY-SA unless otherwise noted.