Neo-German nation of Terra was at the head of military research. They developed innovations like the micro-super capacitor, neurological enhancements, and rail-guns. They were among the first to make the thrust into inter-solar travel. They were heavily competitive and often got in minor conflicts with other nations because of this. By 2130 they were declared a solar super power. With this, they made sudden advances towards outlying colonies and mining stations. They soon gained control over several asteroid belts, further increasing their power. Tensions increased with Briton and American forces. They imposed a blockade of German ships, forbidding them to enter their space, "Allied Space" it was called. Tensions rose more from that point. In 2230 they broke off all relations with the Allied forces. All countries were stressed to the breaking point. Several splinter factions were at each others throats. Finally in 2241 open conflict broke out. The most heavy combat was on and around Terra. Terrible weapons were used. Whole continents were glassed, and oceans boiled away. Forests burned for years as men lived and died in what was literally, hell on earth. In 2257 the Allies broke through to German outposts and decimated their resources. The war was lost for them. A year later, peace negotiations ended. It was agreed that all fleets would leave the Sol system and purge their navigation computers of all records of its location. Decades later Sol was just a memory.

Since the purge of the Sol system, German technology has taken a complete turn around. Instead of focusing on industrial advances it focused on military research. Improvements to Plasma Fusion drives were made, reactor output increased, more powerful engines, more efficient weapons, different weapon systems and unmanned craft were all tried. Eventually fusion weapons were developed in place of the iconic rail-guns

Recently a species known as the Ong'li, commonly referred to as the Ogus, have been integrated into the Empire. Their physiology is very different than that of humans. They have augmented armor, cybernetic implanets, and multiple sensory organ clusters. Their homeworld is a temprate forest. Lore says there used to be a race of hostile machines that populated the planet. They warred with the Ong'li for many centuries. Much of the Ong'li technology was derived from that of the machines. They developed a fabric-like armor stronger than most static armor that the Empire uses. They are being used for scouts and combat support.

The use of Neo-german guided weapons to bombard a target prior to a frontal assault. 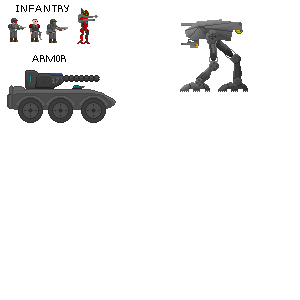 Combat engineer with a SPMT

The Reaver is designed to be able to take down larger ships fast.

The Demious is a ship built for heavy ship to ship combat. It has a higher payload than most other ships of its size. It is mainly used for blockades and assaults

The pride of the Navy. It is built for heavy combat. It packs a heavy punch and can take one as well

The mainstay of Air Force power. It is capable if holding 12 fighters in 4 squadrons and has a micro-factory to produce more

The heaviest assault ship in the fleet. It is covered in weapons and is often used as a base of operations.

Capable of building ships at a very fast rate. The lifeblood of the fleet. Alternately able to crack planets for mining.

Able to produce a bubble-like shield around many ships

Retrieved from "https://picturewars.fandom.com/wiki/Neo-Germans?oldid=4582"
Community content is available under CC-BY-SA unless otherwise noted.